I struggled to come up with a more descriptive summary than "Space Opera."

Centuries in the past, mankind fought a seemingly unbeatable adversary from sector to sector across the Spiral Arm until the war ground to a standstill and the Enemy withdrew. Believing that they had won, the citizens of the galaxy rebuilt. The Inner Worlds, which had escaped the worst of the war's ravages, became even more insular, while the Rim worlds adopted a free and easy way with law and order. Now, hundreds of years after their withdrawal, the Enemy is back - and this time they'll be satisfied with nothing less than the extinction of the galaxy.

Earth's first colony, fleeing an autocratic Earth. I think I've read this before.

Jorie Taylor has lived her whole life on the generation ship Beacon. Fleeing an Earth tearing itself apart from its exhaustive demand for resources, the Beacon is finally approaching Sarbras, the planet circling Tau Ceti they hope to make humanity’s new home.

But Earth has recovered from its near-death experience and is now under the control of a ruthless dictator whose sights are set on Tau Ceti as well. President Jurudu knows how to get what he wants—and he wants Sarbras.

A new spin around the block in a classic SF vehicle.

A reluctant voyager crossing the Pacific in 1850; a disinherited composer blagging a precarious livelihood in between-the-wars Belgium; a high-minded journalist in Governor Reagan's California; a vanity publisher fleeing his gangland creditors; a genetically modified "dinery server" on death-row; and Zachry, a young Pacific Islander witnessing the nightfall of science and civilization — the narrators of Cloud Atlas hear each other's echoes down the corridor of history, and their destinies are changed in ways great and small.

In his captivating third novel, David Mitchell erases the boundaries of language, genre and time to offer a meditation on humanity's dangerous will to power, and where it may lead us.

A grand tapestry made of shiny threads, a Buddhist sci-fi novel, a matryoshka doll manuscript, a writing stunt.

Verdict: A great book by a great writer, and while some have dismissed it as a show-offy writing stunt, I thought it worked very well. Some literary authors go slumming in genre fiction, but David Mitchell is more like a genre author who has snuck into the ranks of litfic.

Also by David Mitchell: My review of The Thousand Autumns of Jacob de Zoet.

In the near future, a signal is detected coming from the Alpha Centauri system. Mysterious, unintelligible data streams in for ten years. Heather Davis, a professor in the University of Toronto psychology department, has devoted her career to deciphering the message. Her estranged husband, Kyle, is working on the development of artificial intelligence systems and new computer technology utilizing quantum effects to produce a near-infinite number of calculations simultaneously.

When Heather achieves a breakthrough, the message reveals a startling new technology that rips the barriers of space and time, holding the promise of a new stage of human evolution. In concert with Kyle's discoveries of the nature of consciousness, the key to limitless exploration - or the end of the human race - appears close at hand. Sawyer has created a gripping thriller, a pulse-pounding tour of the farthest reaches of technology. Factoring Humanity is a 1999 Hugo Award Nominee for Best Novel.

If John Carter were a biker chick.

Jane Carver is nobody's idea of a space princess. A hard-ridin', hard-lovin' biker chick and ex-Airborne Ranger, Jane is as surprised as anyone else when, on the run from the law, she ducks into the wrong cave at the wrong time - and wakes up butt-naked on an exotic alien planet light-years away from everything she's ever known. Waar is a savage world of four-armed tiger-men, sky-pirates, slaves, gladiators, and purple-skinned warriors in thrall to a bloodthirsty code of honor and chivalry. Caught up in a disgraced nobleman's quest to win back the hand of a sexy alien princess, Jane encounters bizarre wonders and dangers unlike anything she ever ran into back home. Then again, Waar has never seen anyone like Jane before.

Both a loving tribute and scathing parody of the swashbuckling space fantasies of yore, Jane Carver of Waar introduces an unforgettable new science-fiction heroine. Nathan Long is a screen and prose writer with two movies, a Saturday-morning adventure series, and several TV episodes to his name. His official website is: www.sabrepunk.com.

A sequel to the Ozark trilogy, in which the author introduces the main character from her other sci-fi series to Planet Ozark.

The Communipaths have traced a mind message of incredible strength to a seemingly empty sector of space, and now Tri-Galactic Federation agent Coyote Jones must find an invisible planet and bring back the unknown telepath who threatens to disrupt the entire Communipath system.

Bursting through a Spell of Invisibility and straight into Brightwater Kingdom on the planet Ozark, Coyote discovers a realm ruled by a iron-willed young woman named Responsible — perhaps the very telepath he seeks. But on this world where Magicians of Rank can call up a storm or cure a wounded and unwelcome offworlder with equal ease, will Coyote's psience or Ozark's spells prove the stronger?

Verdict: This is not a book you'd want to read as a stand-alone. If you have not read the Ozark Trilogy first, and preferably a couple of the Coyote Jones books as well, then Yonder Comes the Other End of Time is going to seem awfully silly and nonsensical. If you have read those books, then this book is still a little silly, but you'll enjoy it more.

Also by Suzette Haden Elgin: My review of The Ozark Trilogy.

An alt-history in which demons and supermen threaten Mutually Assured Destruction. 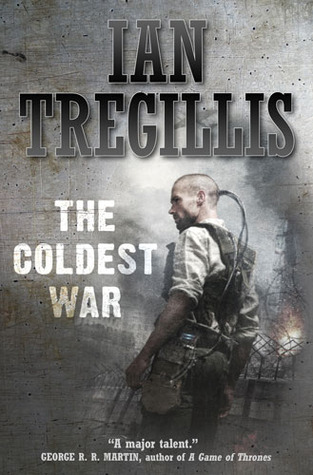 Someone is killing Britain's warlocks.

Twenty-two years after the Second World War, a precarious balance of power maintains the peace between Great Britain and the USSR. For decades, the warlocks have been all that stand between the British Empire and the Soviet Union-- a vast domain stretching from the Pacific Ocean to the shores of the English Channel. But now each death is another blow to Britain's security.

Meanwhile, a brother and sister escape from a top-secret research facility deep behind the Iron Curtain. Once subjects of a twisted Nazi experiment to imbue ordinary humans with extraordinary abilities, then prisoners of war in the vast Soviet effort to reverse engineer the Nazi technology, they head for England.

Because that's where former spy Raybould Marsh lives. And Gretel, the mad seer, has plans for him.

As Marsh is drawn back into the world of Milkweed, he discovers that Britain's darkest acts didn't end with the war. And as he strives to protect Queen and country, he's forced to confront his own willingness to accept victory at any cost.

The sequel to Bitter Seeds fast-forwards from World War II to the Cold War.

Verdict: A great sequel, and a book that makes me eager to finish the trilogy. Mixing superpowers, magic, and alternate history in a very grim world of 1963, The Coldest War is a fast-paced bombshell of an adventure not afraid to threaten to destroy the world.

Also by Ian Tregillis: My review of Bitter Seeds.

The crew of a generation ship encounters an alien vessel that practically screams "Get out!" so of course they poke around.

Home to generations of humans, the starship Argonos has wandered aimlessly throughout the galaxy for hundreds of years, desperately searching for other signs of life. Now a steady, unidentified transmission lures them toward a nearby planet, where the grisly remains of a former colony await the crew. Haunted by what they have seen, the crew has no choice but to follow when another signal beckons the Argonos into deep space — and into the dark heart of an alien mystery.

Scarier than Alien and hella smarter than Prometheus.

Verdict: I sometimes make fun of books that seem to be Hollywood-bait — "Please, please Ridley Scott, option me!" — but dayyum, Ship of Fools would make an awesome, pants-shittingly scary movie. This is the manuscript that Prometheus should have been.

Book two of the Newsflesh trilogy is a thrill-ride like the first, though the twists and turns had me cocking my eyebrow a bit more.

Shaun Mason is a man without a mission. Not even running the news organization he built with his sister has the same urgency as it used to. Playing with dead things just doesn't seem as fun when you've lost as much as he has.

But when a CDC researcher fakes her own death and appears on his doorstep with a ravenous pack of zombies in tow, Shaun has a newfound interest in life. Because she brings news - he may have put down the monster who attacked them, but the conspiracy is far from dead.

Now, Shaun hits the road to find what truth can be found at the end of a shotgun.

Things can always get worse, even after a zombie apocalypse.

Verdict: The Newsflesh trilogy is a real page-turner. Even if the story sometimes stretches credibility (come on, it's zombies!), there aren't a lot of books I've read lately that make me want to zoom through them so quickly. Deadline has a few weaknesses that make it slightly less convincing than the first book, but I'm still eager to read book three.

Also by Mira Grant: My review of Feed.

Dashiell Hammett + William Gibson in a noir cyberpunk thriller which is better than most.

In the 25th century, humankind has spread throughout the galaxy, monitored by the watchful eye of the U.N. While divisions in race, religion, and class still exist, advances in technology have redefined life itself. Now, assuming one can afford the expensive procedure, a person's consciousness can be stored in a cortical stack at the base of the brain and easily downloaded into a new body (or "sleeve") making death nothing more than a minor blip on a screen.

Ex-U.N. envoy Takeshi Kovacs has been killed before, but his last death was particularly painful. Dispatched 180 light-years from home, re-sleeved into a body in Bay City (formerly San Francisco, now with a rusted, dilapidated Golden Gate Bridge), Kovacs is thrown into the dark heart of a shady, far-reaching conspiracy that is vicious even by the standards of a society that treats "existence" as something that can be bought and sold. For Kovacs, the shell that blew a hole in his chest was only the beginning.

Yes, it's everything Requires Only That You Hate said it was, but it's still pretty entertaining.